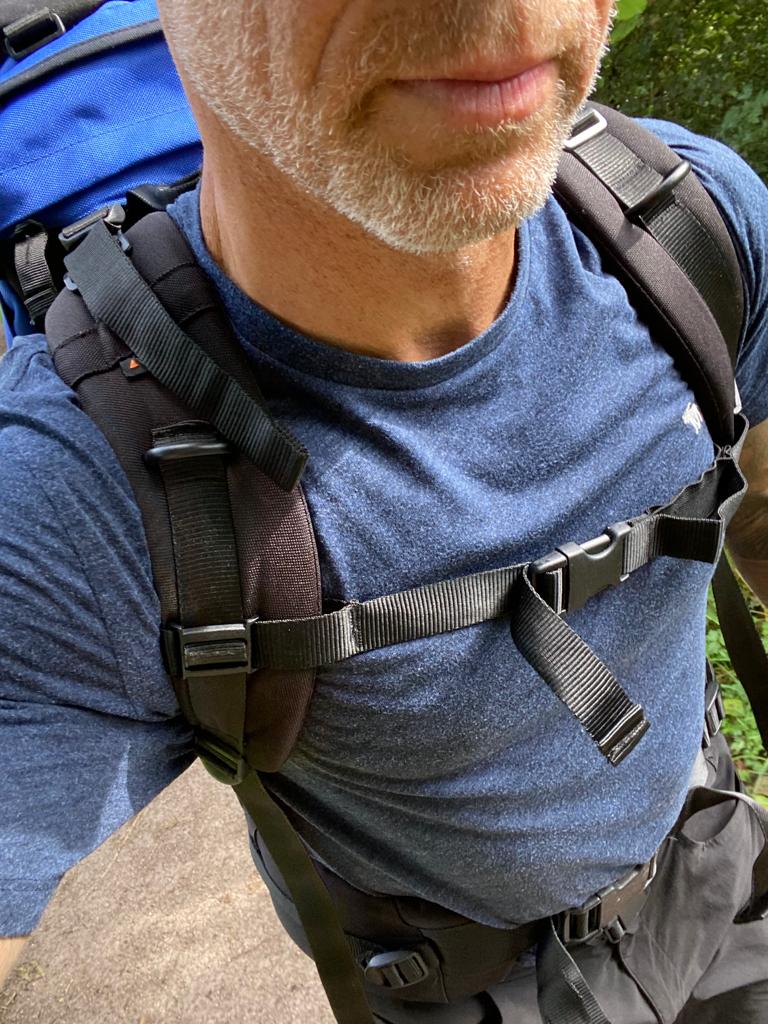 First off, what is it? Well we have standard “walking” which I’m not going to explain what that is. Hiking – going for an extended walk in nature and then we have “rucking” which is going for a hike with a rucksack on but it is with the intention of loading that rucksack with weight for the purpose of carrying a heavy load.

At time of writing this article, I am a novice to rucking so what I write here today is by no means the bible. It is my thoughts on my new hobby plus what I know as an experienced fitness coach. I’ve only been out probably 10 times with weights ranging from 16kg to 35kg and times from one hour to 4 but in that time I’ve experienced a few things and I know this hobby is here to stay because of them.

On the 5th of June 2021 I met my daughter Fern by Tegg’s Nose Country Park, Macclesfield. I got there half an hour before her and parked at the bottom of Buxton Old Road in order to walk up and meet her for when she was due to arrive. Cyclists reading this will know the start of Buxton Old Road is steep! I heaved my 18kg rucksack on and began the ascent. After the first few steps I thought “Whoops! Might have made a mistake here!” Immediately ascending with a heavy load was certainly an introduction to this kind of walk and I knew the day was going to be tough. Those of you who know me though will know one thing – I like tough! Tough is where happiness lies.

After about half an hour I met Fern and we meandered our way, one direction or another up to the Cat & Fiddle, turned around, came back and stopped for a pint of Diet Coke in a pub we passed along the way. That was my first ruck and I learned several very valuable lessons that day. The first…

All are equal in this case means everyone is on a level playing field. I wanted a workout that day and I wanted it to feel tough. I also wanted to see my daughter. If we’d have gone for a walk together it would have been very nice, but I wouldn’t have gotten all I wanted from the day. This way we both got to hang out and I had a workout. What I discovered here was that everybody can have it the same way.

You want to walk with your kids and you’re frustrated it’s too slow? Sling some weight in your pack?

You want to walk with your mum but she lags behind? Load a few more kilos in then you’re both the same!

You want to workout today but you feel mean not walking the dog? You guessed it!

This reasoning can apply to every single hike or walk you do from now on because rucking is extremely sociable. You can have great conversation with whoever you’re with above what you would achieve from other endurance sports; running, cycling, rowing, swimming etc. Yes of course you can talk during those (maybe not swimming) but conversation can get hard and groups can get split. With the ruck you can stay together easier and interchange between walking partners more frequently along the route depending on how many are out. This reason becomes especially important given our changing world at the moment and the amount of time many of us are spending isolated at home. Human connection is vitally important. It is actually a matter of life and death as many studies show people literally die from loneliness.

Almost daily I see people out walking for fitness and I can see a frustration on some of their faces. The frustration is that they want just a little bit more out of that walk but maybe running hurts or maybe they feel self conscious running or maybe running is just horrible. Now they can have more. As much as they want. The feeling of self consciousness is removed with this approach. Many people feel embarrassed running because they are breathless and slow and don’t look graceful. Another problem with running is if we stop we feel like we’ve failed and every motorist is laughing at us. When rucking a heavy weight, nobody gives two hoots if you stop or not, plus you will be less likely to stop because it isn’t as aerobic as running.

We “kind of” have two components (there are 8 more) to exercise which are strength and endurance. Power lifters have strength but lack the other, marathon runners the opposite. What often let’s us down running is our lack of endurance. Rucking gives a lot of structural strength but it isn’t so hard on the lungs which means you can go for longer. What I discovered though is if you ruck uphill you are able to put a jog in if you want and by golly! If you put an effort in there you’ll be blowing your heart and lungs out by the time you finish.

Since that day, another ruck session I’ve done is to visit a hill that takes around 5-7 minutes to ascend – Old Pale in Delamere Forest. I ran/jogged/rucked up it as fast as I could and walked down. After doing that 5 times I could barely watch tv the rest of the day! So aerobic junkies you can have a hit from this no problem!

Extra bonus! All this aerobic work is accompanied by permanently carrying a load. That interval session at Old Pale had me carry 18kg for 2hrs and 3mins, removing only 3 times for a drink for around 4 minutes each. Just think of the calorie burn going on here. I don’t have evidence to publish right now but look at it from a common sense standpoint. You can run up a hill unweighted and hit high heart rates blowing hard or you can run up a hill, reach the same heart rate AND be carrying an 18kg load! It’s another “6 Pointer”.

It’s affordable to everyone. I’m a cyclist. It frightens the hell out of me when I add up the money I’ve spent on bikes and the stuff that’s “needed” to accompany bike riding. It’s actually obscene at times.

To begin with you already own enough clothes and shoes to get started so we can move right into this for £45. There isn’t a fitness hobby that comes cheaper. Let’s move on!

In my early days of rucking, the final benefit I can think of is to be outside. There is no argument that the world’s health is worsening. Despite improvements in medicine, we are becoming fatter, sicker and more depressed than ever. A large reason behind this is similar to I mentioned before, we are isolated in rooms with artificial lights, electronics and screens that are taking all our attention. Forget human interaction, even if you get outside on your own you will be improving your physical and mental health no end.

Vitamin D is a buzz at the moment. You don’t get it just because the sun’s shining and you pop to the shop in your car for a loaf. You get it by exposing large areas of skin to daylight for prolonged periods of time. Ruck!

And for mental health, try performing this experiment on yourself with the task of finding out what makes you feel happy and content. Walk or run on a treadmill indoors then walk or run outside in nature. You will find the latter makes you happy for reasons such as you are away from all stressors and are exposing yourself to clean air and seeing wildlife.

One major benefit of feeling happy is that you are then less likely to seek pleasure from other substances such as alcohol, sugar or drugs because you are content.

For now then, there we have it. Fill a rucksack, get outside and get marching. I guarantee you will love it. And if you don’t, you can always give me a shout and we’ll go together. You can’t fail to enjoy yourself after spending time in my company!